Blockchain Job Listings at ATH as Number of Searches Plummets 53% in Past Year: Research

According to data sourced from Indeed.com, blockchain-related jobs have seen a spike of over 1400% in the past four years aligning with the exponential growth experienced in the price of Bitcoin. Traditional companies lead the way in job openings for blockchain companies despite recent regulatory challenges in the industry.

The pioneer cryptocurrency has seen its price shoot up by 230% to close in on $13,000 USD during 2019 causing a new rush by companies to invest in blockchain technology and talent. According to data from job market website Indeed.com, the share of blockchain jobs has spiked by 1,457% per million people in the past four years, dating back to September 2015. 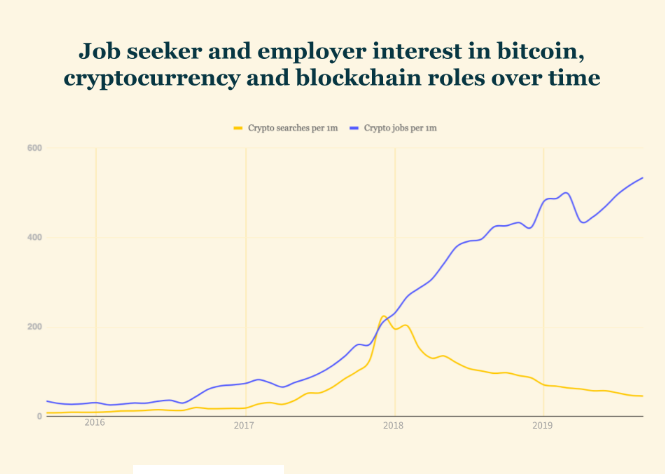 Source: BeSeenHowever, the demand for these job is growing slower than the openings available witnessing a 470% increase in the same period. Since hitting a peak of 220 jobs per million people in late 2017 – during the bull run – the number of searches for jobs in the industry has decreased significantly. Over the past year, the number of job postings in the industry has increased by 26% while the number of searches for blockchain jobs decreased by 53% in the same period.

The number of job openings across the native blockchain companies lags behind the traditional industries with only three companies making it to the top 10 – Coinbase Inc. (70), Ripple Inc. (54) and Gemini Trust (42). Circle, Kraken, and ConsenSys also ranked among the top 20 companies actively seeking talent in the field.

Software skills dominate the listings with the salary packages more than other openings in the field. Senior software engineers, software architects, full-stack developers, and front end developers are the most searched for talent according to the data. 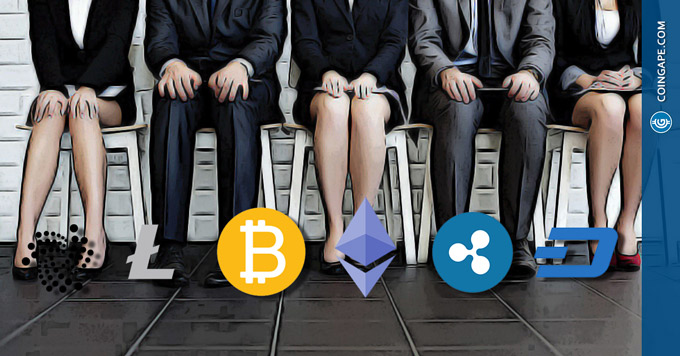 Blockchain Job Listings at ATH as Number of Searches Plummets 53% in Past Year: Research

Coingape is committed to following the highest standards of journalism, and therefore, it abides by a strict editorial policy. While CoinGape takes all the measures to ensure that the facts presented in its news articles are accurate.

Disclaimer
The views, opinions, positions or strategies expressed by the authors and those providing comments are theirs alone, and do not necessarily reflect the views, opinions, positions or strategies of CoinGape. Do your market research before investing in cryptocurrencies. The author or publication does not hold any responsibility for your personal financial loss.

Will This Quantum Computing Breakthrough Save Bitcoin and Cryptocurrency?